Fortunate enough for me, shortly after Natalie was here, I was blessed with the presence of my childhood pal, Nicola.

Some factoids about the pair of us:

Our friendship is at that stage where we are only nice to each other when needed. For example on her arrival at the airport, she greeted me with the middle finger. I expected nothing less.

After picking up a middle finger wheedling Nicola from the airport, we make our way back to Invermere. She of course wastes no time in noting how dusty my car was (In Canada it was considered sparkling but what do I know!).

Nicola’s welcome into Invermere was I doing some emergency swerving while driving to avoid the deer that just decided to jump in front of the car. Welcome to Canada mate.

I couldn’t write this post without including a note about us dressing up for Halloween. Nicola loves fancy dress, me not so much but we managed to coordinate a costume. Nicola – a witch (fetching) and me, her black cat. I even had a tail.

It sure was double double toil and trouble that night! 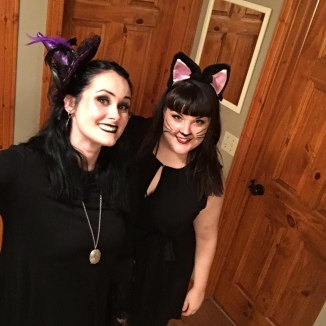 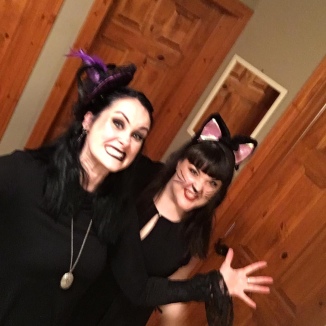 After a day of recovering from the shenanigans of the night before, we set off on our 10-day road trip. We would be driving across British Columbia, to Vancouver, then onto Victoria and then crossing the border to Seattle.

Very proud of ourselves for getting up and organised we were out of Invermere by 8.30am. First stop was Lake Louise, (after stopping at a couple of view points through the park). (Note, so much better getting there before 12 to avoid the coach load of tourists in your instagram photos).

No matter how many times I visit here, each time I come the Lake always looks different and I soak in a different experience each time. It was even more amazing watching Nicola taking it all in for the first time! Actually that’s a lie, it was funny as hell watching her deal with the cold in her 101 layers 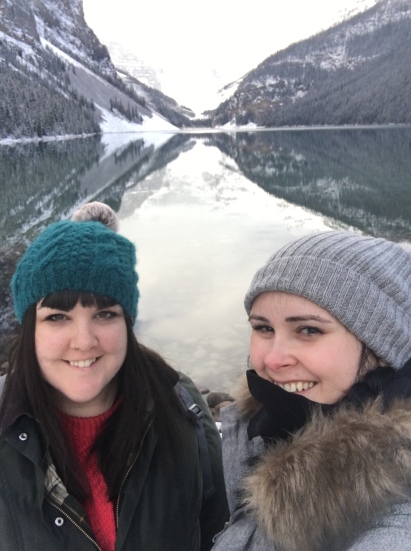 She and I
We are then back on the highway heading towards Golden.

Then it suddenly hits me…I left my passport at home.

Nicola just looks at me, “I am not even surprised”. Not the first time I have done something like this.

Now considering we are planning on crossing the border, it really did throw a spanner in the works. We had no choice, but to go back home and get it.

I was not allowed to look after my passport from that point. Probably for the best.

I am probably the worst person to have driving, as I get very easily distracted, ooooo shiny thing. ‘Keep eyes on the road Laura! often was shouted by Nicola.

My favourite thing along the journey was watching the trains go through the mountains. We actually stopped to watch trains go past each other, through tunnels that were dug out into the mountains. I was mesmerised. 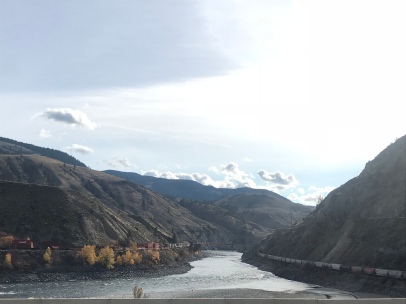 So mesmerised in fact, I made Nicola drive for the next stretch of the journey so I could stare gormlessly out the window at the trains.

Nic: Laura what does this road sign mean?
Me: I don’t know.
Nic: What do those red flashing lights mean?
Me: I don’t know, but maybe we should slow down.
Nic: Did you do any driving test when you started driving in Canada?
Me: No….
Nic: Don’t you think you should?
Me: Pffttt….I will just Google it 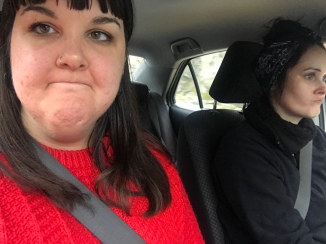 It rained, as you can see below. 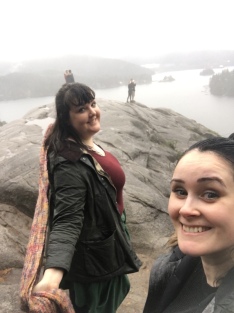 Stay tuned for Part Two where we make our way to Victoria, and attempt to make it across the border…

#livinglifeontheedge Literally
Did you really live a Canadian Winter if you don’t get half naked in the snow? ⛄️ #canadianwinter #winter #isitspringyet
🌈🌧
#Invermere #isolationwalks #kootrocks
#isolation walks #invermere #kootrocks
#columbiavalley #invermere
❄️
All Smiles ... Before we went bush diving ❤️